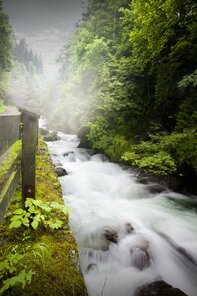 These hikes and walks take course through Talbachklamm gorge: 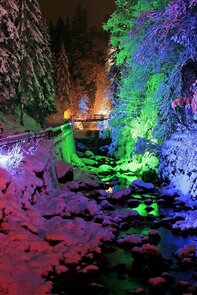 One entrance to Talbachklamm canyon is situated at the southern town limit of Schladming, the other entrance is located in the village Untertal. Through the canyon the Talbach river cleaves its way from the Rohrmoos' valleys to the town of Schladming.

The path through the canyon is popular among locals and guests alike for walks, jogging or as bike connection to the valley Obertal and Untertal. Throughout the seasons the gorge shows its various impressive facets.

Until midnight the path is illuminated by a path lighting and the river and rapids in the gorge itself are dipped into colour by a separate effect lighting.

Enormous water amounts stream through the narrow gorge in spring, caused by the melting water of the Schladminger Tauern mountains. A vast quantity of snow melts and fills the rivers of Obertalbach and Untertalbach, which meet in the village of Untertal, where they join to form the Talbach river and later join Enns river in Schladming.

In summer the path through the canyon is starting point for many walks and hikes from Schladming to the Rohrmoos' valleys. Examples are the theme trail Wild Waters or the Miners Trail to Obertal, starting at the village of Untertal.

The gorge is also popular among locals and guests who search for cooling on a hot summer's day. The cominbation of the narrow gorge and the power of water catapult the smallest of water droplets into the gorge's air and thus provide the perfect cooling in the warm summer months.

This way the climate in the gorge is comfortably cool on the hottest summer days.

In fall the river and the canyon reveal another interesting and beautiful facet. A marvelous play of colour shows on the trees that line the edges of the gorge while autumn's soft natural light transforms it into a mystical place. No wonder there is a bunch of stories, legends and myths about the Wild Waters and the gorge.

In winter the canyon reveals a glittering world with ice and snow-covered formations on the rocks and near the small creeks. The effect lighting in Talbachklamm gorge thus shows even more to advantage in winter.