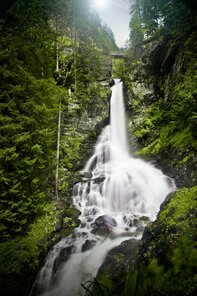 The track record of todays hiking trails of Wild Waters reach back to the mid 1990s. Considerations about an alpine trail beyond the Great Riesach waterfall through Hell's gorge first came up in 1995.

In the course of time the idea of an alpine trail developed into a project which first included Rohrmoos' Untertal valley and eventually extended to the Overtal valley.